Despite the rhetoric of the new Five-Year Plan – which, like the previous one, aims to increase the share of consumption in GDP – the path of least resistance is the status quo. The new plan’s details reveal continued reliance on investment, including public housing, to support growth, rather than faster currency appreciation, substantial fiscal transfers to households, taxation and/or privatization of state-owned enterprises (SOEs), liberalization of the household registration (hukou) system, or an easing of financial repression.

China has grown for the last few decades on the back of export-led industrialization and a weak currency, which have resulted in high corporate and household savings rates and reliance on net exports and fixed investment (infrastructure, real estate, and industrial capacity for import-competing and export sectors).

The problem, of course, is that no country can be productive enough to reinvest 50% of GDP in new capital stock without eventually facing immense overcapacity and a staggering non-performing loan problem. China is rife with overinvestment in physical capital, infrastructure, and property.

To a visitor, this is evident in sleek but empty airports and bullet trains (which will reduce the need for the 45 planned airports), highways to nowhere, thousands of colossal new central and provincial government buildings, ghost towns, and brand-new aluminum smelters kept closed to prevent global prices from plunging.

Commercial and high-end residential investment has been excessive, automobile capacity has outstripped even the recent surge in sales, and overcapacity in steel, cement, and other manufacturing sectors is increasing further. In the short run, the investment boom will fuel inflation, owing to the highly resource-intensive character of growth. But overcapacity will lead inevitably to serious deflationary pressures, starting with the manufacturing and real-estate sectors.

Eventually, most likely after 2013, China will suffer a hard landing. 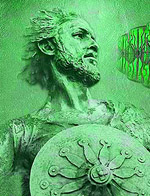